What Entrepreneurs Can Learn from the CIA 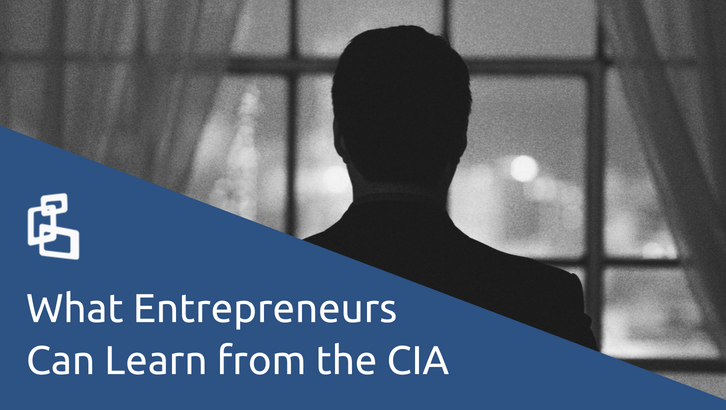 James Bond. Everyone can quote name his signature car, the letter designated to his boss, and how he takes his drink.

The world of James Bond is fast, sexy, and alluring.

And, it quite possibly couldn’t be further from the truth.

Even so, James Bond will always hold a special place in my heart because he was my gateway drug into my fascination with spies. I grew up wanting to be James Bond. Instead of Armani suits, I’d wear Versace dresses. The confidence. The swagger. The sex appeal. Who doesn’t want to be James Bond?!

Even though Bond’s campy character bears little reflection to real life, he is the catalyst for the majority of our interest in the spy world. I was just one of those people who took that curiosity a little further than most.

In all of my interviews with master influencers – hostage negotiators, con-artists, pick-up artists, trial attorneys, law enforcement interrogators, etc. – I have to confess that my favorite interviews have been with CIA agents and others in the intelligence community (aka spies).

The breadth of our conversations covered psychology, strategy, technique, and surprisingly enough, self-influence. Which, when you think about it, makes sense. Intelligence agencies were built on how to maximize intelligence gathering from people, also known as Human Intelligence (HUMINT).

Since I started my research, I’ve become more and more surprised at how many lessons in intelligence gathering can be applied to entrepreneurship.

*movie trailer voiceover* One person. One mission. With few resources. Recruiting a select group of people to take action. (Does anyone else hear action theme music when you read that?)

The fact is, there are several intersections between the worlds of entrepreneurship and espionage. Only entrepreneurs are the lucky ones because our actions aren’t intertwined in life and death scenarios (usually).

Act on the Best Intel You Have

There are few certainties in the world of spying and espionage. You can’t wait until you know everything. By then, it’s too late. The intelligence community does its best to piece together data from all the different disciplines – human intel, imagery intel, open source intel, cyber intel, etc. – and see the full picture.  They do the best that they can with what they have. Is it perfect? No. But what is?

When you have enough, take action. In the fast-paced world of spy plots, attacks and counterintelligence, waiting means failure.

Entrepreneurship is the same, but with one key difference.

For spies, the attacks that derail success are from outside sources. For entrepreneurs, the battle is waged internally.

If an entrepreneur waits too long before taking action…

If they bide their time for the perfect moment…

Then they will always stay stuck. They will talk about their idea but never see it come to fruition.

Spies find comfort and exhilaration in the unknown. Thus, so should entrepreneurs.

Yes, we can model successful people, but no matter how many people have walked a path to success, no one has walked yours.

In fact, the similarity between spies and entrepreneurs is perhaps most clear in this ubiquitous Tony Robbins quote, “Success leaves clues.”

Piece together the clues to find your perfect path to success.

Spying is not as action-packed as spy movies. Many intelligence officers will tell you that it’s actually quite boring. There is a lot of waiting. Patiently.

Even a small task like approaching a mark can take weeks, sometimes months.

We live in a fast-paced, give-it-to-me-now era. Instant gratification is expected. Especially when you look at all the marketing saying how so-and-so made $250,000 in two weeks. And then you read the fine print. …Oh, wait, you don’t read the fine print? Ok. Allow me to share with you what a typical disclaimer says on those pages:

Any case studies, examples, illustrations cannot guarantee that the user will achieve similar results. In fact, your results may vary significantly and factors such as your market, personal effort, and many other circumstances may and will cause results to vary.

Of course, I’m not saying that it’s not possible to have outstanding success extremely quickly. It absolutely is possible. But if you’re only going to rely on the short game, you’ll be sorely disappointed.

You will be a happier entrepreneur when you give yourself the breathing room you need to make the sales you want to close.

Here’s what I mean.

If every conversation you have or every email you send feels like THE conversation or THE email that has to get a “yes,” then you will be in a perpetual state of stress. Your unintentional desperation will waft off of you like a bad odor. Not attractive.

Instead, give yourself the time to strategically build in relationship building in your interactions – both online and offline.

The old school ABC’s of selling are long gone.

The ABC’s of INFLUENCE are timeless: Always Be CONNECTING.

When you’re focused on connection, you release the pressure you’ve been putting on yourself, and it’s a much more enjoyable experience for you and the person you are selling to.

Plus, that kind of connection, is a stronger, deeper, longer lasting connection compared to the drive-by wham-bam pushy sales process. Which means you’ll have happier clients that will be with you longer.

The Battle Between Technology and People

There is a political battle being waged in intelligence circles. Should the government cut or even get rid of covert field operations? After all, can’t all this surveillance and technology provide the information that they need? Or, are covert operations still a critical intelligence gathering discipline? Even though it is riskier, doesn’t it provide better intel than any algorithm?

There are strong opinions on both sides.

While technology is fantastic and it can provide vast amounts of information quicker than ever, there will never be a substitute for the nuanced, contextual, and up-to-the-minute information that can be gathered from Human Intelligence (HUMINT) operatives.

The agency knows this and that is why they will never fully get cut their field operations funding.

Entrepreneurs are facing a similar battle. Technology has given us so much. It’s hard to not get sucked into the world of online marketing and put 100% of efforts into it.

But, if you’ll notice, even the best online marketers aren’t putting 100% of their efforts into just the online space. They are still out in the field giving speeches and attending events.

Why would someone with a humongous email list, fantastic passive income, and a minor yet notable celebrity status still go to such events? Why wouldn’t they just spend their time either binging on Netflix or drinking a Pina Colada out of a coconut shell with an umbrella sticking out of it on some tropical island somewhere?

It’s because no matter how much they push the message of the miracles of online marketing, they know that amazing power will always be in real-world interactions.

The relationships created at such events are fruitful on personal and professional levels. Where do you think those guys get their A+ affiliates to promote their products? Events. Real world communities. Not online.

So, go ahead and use all the leverage that online technology can create. It is fantastic. Just be sure to also have your person-to-person plans and strategies built in, too.

Don’t underestimate the power of being connected to ONE person. As the saying goes, your network is your net-worth.

One person can save the day.

Why The Tools That Are Supposed to Make Your Business Easier Are Failing, Draining Your Bank Account, and Making You Feel Bad about Yourself (and how to change all that)

Your Influential Secret Weapon for Every Conversation