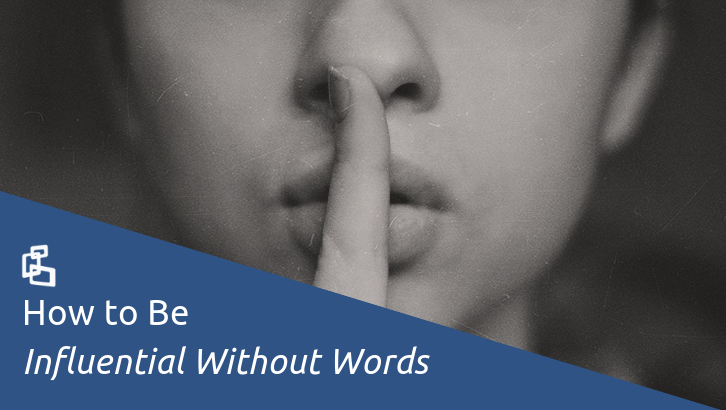 Did you know you can be influential without even speaking?

Sometimes your most influential decisions have nothing to do with what you’re saying. Yes, words are an important factor of influence, but sometimes you’ll want to turn your focus from the message and direct it to the messenger.

If you want to really step-up your influence game, then now is the time to start paying attention to your state.

Let’s start by defining state, then we’ll talk about the different circumstances in which your state can enhance your influential conversations.

I was introduced to the concept of state in my 20’s while reading Tony Robbins’ books. No matter if you like, love, or hate Tony, understanding the utility of state can become your new favorite “Aha!” lesson for life.

The understanding and utilization of state give you:

Here’s an example. Many of my clients want to feel more confident while speaking, either at conferences or while giving a presentation in a boardroom. Of course, you can’t just say to yourself, “Be confident,” over and over again. In fact, doing so is actually going to make you stress out more. Which means, you can’t talk yourself into feelings, you must embody them.

So when you’re stressing before a presentation, your body is doing stress. Your brain picks up on those signals and aligns your emotions – and therefore, your thoughts – with the signals of stress.

To help my clients regain control and put themselves into a more productive state, we examine what the physical life of confidence looks like.

For example, a confident person doesn’t slouch their shoulders and lower their head while speaking. Instead, they stand upright with their shoulders back, head up, neck long, and look squarely towards their audience.

One of my clients was experiencing a sales slump that was stressing him out. Because his last string of sales calls didn’t go well, he found himself feeling extra anxious and stressed out before the calls he had coming up. Which, in turn, only made those calls go even more poorly.

So, we took a look at his state before calls. How was he doing stress and anxiety? And how could we replace it with how he does confidence? This exercise alone led to him landing his next 3 sales calls in a row!

After a few months of a bad sales calls, that’s a HUGE win!

The Magic of Mirror Neurons

State not only allows you to influence your own life in positive ways, but it can also be a powerful technique when you want to influence others.

You can influence someone through your state by way of the neural-mechanism, mirror neurons. These little triggers in our brains cause us to empathize with what we see, and aid in our learning and development process.

You can see this in action the next time you’re hanging out with an infant. When you’re playing with a baby, start sticking out your tongue at it. After a period of time, especially once the brain is formed to a certain level, the baby will start to stick their tongue out right back at you! That’s the result of mirror neurons in action.

Mirror neurons also help us develop empathy, meaning you feel what you see.

Let’s say you’re watching your favorite sports team and they win. (I cannot relate to this because the Dodgers totally sucked at the end of the season, but we’ll move on.) So when your sports team hits a home run like the Red Sox did (over and over and over again), then you literally FEEL that excitement and joy! (Assuming you’ve made the poor decision in your life to be a Red Sox fan. But, hey, I don’t judge.)

Why do you feel that jolt of excitement? You’re not out on the field. You’re not a part of the team. You’re not even the ballboy! So why are you excited? Because your brain is on fire feeling what it’s seeing…via mirror neurons!

Emotions and Neurons and State, Oh My!

Everyone has mirror neurons. Which means that all people feel what they see. So while we might not be able to control someone’s feelings, we certainly have control over what they see, aka what we can present to them. This is how we can, at times, elicit emotions from others.

Becoming a master of your state means embodying certain emotions at specific and purposeful moments.

The police force is actually trained in this area (and could apply it, ideally, more often). They are trained to approach conflicts in a calm and composed state. Then, they need to be able to maintain it, in spite of negative energy coming at them. Yes, this takes skill. It’s worth the effort because an officer can elicit calmness from others if they maintain their own calm state.

Think of it this way. If an officer gets swept up by the aggressive energy of the people they approach, then that aggression gets reflected and enhanced. No bueno. But if an officer is able to maintain their calm state, then they can energetically lead others to follow suit.

Whoever has the strongest state can often dictate the state of those around them.

You likely have experienced something similar to this. Let’s say you’ve had one of those horrible, no good, terrible, bad days. You’re frustrated and miserable. Then, let’s say you bump into Janet from HR, who is just the bubbliest, nicest sweetheart in the world. Normally, you enjoy Janet’s energy. But goodness gracious, you really don’t want to be around her today because her positive energy is going to kill your negative energy and you really want to wallow in it.

But after a little bit of hanging out with Janet in the break room you start to smile a bit more. You notice the beginning of feeling better and maybe even a little playful! You feel this shift because her state is stronger than yours and those mirror neurons have kicked in.

Be What You Want to See

This knowledge not only gives you the tools to diffuse negative situations, but it also empowers you with the ability to elicit emotions from other people.

And in order to do so, you need to be what you want to see.

If you want excitement from a group, then honey, you have to be excited. Emanate joy to create!

No matter what state the person or audience is in, stay with your vibe until they come into the fold.

The power of state is the ability to elicit emotions in your partner without words because mirror neurons are working to your advantage.

This is why I turn up my personality right before my speeches. I’m friendly. I’m shaking hands. I’m smiling big! There is a video of me dancing to the ballroom music that’s playing in the hall before my speech, simply because I want everybody else to feel that high energy vibe!

Does it take effort on your part to set the tone? Oh yeah. Does it sometimes go against what you naturally want to do in situations? Yes, but you have to ask yourself, is the mission more important than my ego?

Another example: Sometimes there are situations where you’re just in disagreement with somebody. It’s heated and continuing to escalate. As an Italian woman, I can certainly say I’ve been there before.

Choose the state that is beneficial to your mission.

Mastering your state will serve you in all areas of your life.

Empathy Building (or, How to Be a Better Human)

State helps us in our own lives, but more importantly, it helps you build empathy for your the person you’re hoping to influence. The more states you are able to access, fully embody, and embrace, the more understanding you have of the people you want to influence–whether it’s a spouse, a loved one, a co-worker, or a distant friend you haven’t talked to in years.

When you can access multiple states of your own, you get even better at recognizing states in others – creating more empathy or sympathy for the people around you.

So, when you see someone acting out of anger, you can recognize that it’s actually their fear fueling the fire because you see a state that you’ve experienced before.

Not only does that make you a better human being, but you’re also a better influencer because you can see the emotional undercurrent of what’s really happening.

So, here’s what we covered:

Influence & Kindness: Why It Matters to Not Suck as Human Being