The Influential Techniques of Frank Underwood: Persuasive Lessons from House of Cards 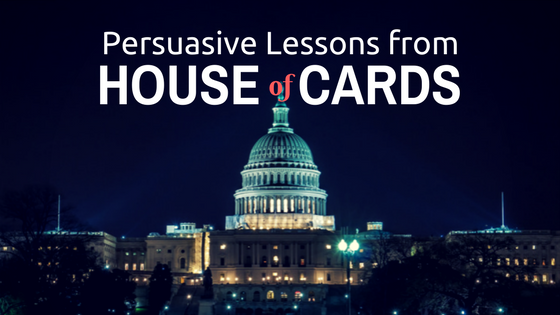 If there were one character who personified the “dark arts’ of influence, then it’s probably Frank Underwood from House of Cards.

And since my moniker is to “bring the ‘dark arts’ of influence into the light,” I’m going to explain a few of the maneuvers of Frank Underwood for you.

***I will try to avoid spoilers as much as possible, but no promises.***

You might notice that most of the influential highlights come from seasons 1-3. There’s a reason for this. As Frank rises to power throughout the series, he uses fewer skills of conversational influence and begins to default towards straight-up coercion.

I’ve chosen specific principles and techniques that you can (and should) use in your every day life. Frank uses each of these tools for nefarious purposes, but that doesn’t mean that the tools themselves are evil. A hammer can build a shelter, and a hammer can also kill. The hammer is neither good nor bad, the intention with which the hammer is used is. The same is true of each of these techniques.

You can use all of these influential skills to bring more positive influence into the world.

In the first episode, Frank shares a poignant piece of influential advice.

FRANK:
When it comes to the White House, you not only need the keys in your back pocket, you need the gatekeeper. (referring to the President’s Chief of Staff)

This comes up again later in the series when Frank says,

FRANK:
The president is like a tree, bending which ever way the wind blows. And Raymond Tusk’s wind blows a little too strongly for my taste.

Frank knows that he has a strong opponent to either win over or remove from the equation. He is always aware of who holds sway over his “mark.”

Influence is Communication with a Goal

As a viewer, we have no idea of what Frank is up to, nor the scope of his schemes. But, it is clear that from day one, Frank and Claire have their plan.

The Underwoods exhibit a critical persuasive principle: influence is communication with a goal.

In episode one, Claire hints to their massive plans when she says, “This is going to be a big year for us.”

People often associate the term influence with a single conversation. They believe that you are influential in one moment. But the best influencers know that influence requires time and strategy.

If you try to jump to the 3rd step (influence) without learning your “mark’s” influential drivers (observe) and without building rapport (connect), then you might bungle the whole deal.

For example, CIA agents will plan for a year or more for turning an asset.

Every step counts. Don’t skip them.

Frank highlights his awareness of the necessary steps and the time it takes when he says, “”You can’t turn a no to a yes without a maybe in between.”

This is a particularly difficult lesson for our era of instant gratification. Most people aren’t wired for long term planning – especially when we really want to land a big business deal.

Just remember, that the bigger the opportunity, the longer your influential timeline might need to be.

Frank Underwood seems to be pure ego in action, but he also knows the importance of suspending his ego when it will serve his greater purpose.

When he finds out that he won’t be named Secretary of State, even though he was promised the position, he is at an impasse. He could tell them all to go to hell, but instead he makes the smarter move. He doesn’t burn bridges.

He responds, “Whatever the President needs.” He knows it’s more important to be perceived as a team player than be ousted from the group. By suspending his ego, he is able to adjust his plans and continue to influence from the inside.

Of course, his ego is only suspended. When he gets a moment to himself, he let his anger and frustration out by smashing his cabinet at home.

Which is more important: your ego or the mission? That’s a question you must answer in many influential endeavors.

We watch Frank’s climb to power by how close he is to the President during press events. At first, he’s barely in the shot, then he’s only one or two people removed from the President, and then he is standing right behind him during the State of the Union.

A related influential lesson is the familiarity principle. This basically states that people tend to build a preference for things simply because they have been exposed to them often enough. This is also called the mere-exposure effect. It’s the reason why companies spend so much in advertising and product placement. They want you to become familiar with their brand so that you develop a preference towards it.

There is personal application for this principle as well. If you want to influence someone, plan out how they can regularly be exposed to you. Attend events that they will be at, communicate periodically, and include video conversations in your plan because you want them to see and hear you. Video is much more influential than email.

Everything about House of Cards is give and take – with the emphasis on take. Even though Frank’s angle is always to someone’s detriment, there is a lesson to be learned here: the Law of Reciprocity.

In general, the Law of Reciprocity goes like this: someone is more likely to do you a favor if you have done something or given something to them first.

The interesting thing about the Law of Reciprocity is that you can likely get a return on value that well exceeds the value that you initially gave. Frank is aware of this when he helps Edward Meechum get back on his security detail.

FRANK:
It requires very little of me and will mean the world to him. It’s a very inexpensive investment.

Simple favors can have a significant ROI. And Frank is right because that one favor earned him a highly loyal servant.

Frank also twists reciprocity into something much more diabolical when he says, “Generosity is its own form of power.”

Appeal to the Higher Self

There is only one glimmer of positive influence from Frank Underwood in the series. It is when he convinces Congressman Russo to get sober and not have a drink for a month so that he can run for Governor. A month goes by and Russo accomplishes the task. He returns to Frank saying the he’s prepared and ready to run.

When they conclude the meeting, Frank says, “Peter, I feel like I just met you for the first time right now” – implying he’s a changed man now that he’s sober. Frank is positively reinforcing Russo’s behavior. With this, he is appealing to Russo’s higher self.

Everyone has a vision for themselves–the person they know they can become. One of the best positive ways to influence someone is to show them how your idea will help them attain their higher self.

Of course, in House of Cards this positive technique is overshadowed by Frank’s bigger plans.

Frank (almost) gets caught in one of his schemes when the President’s Chief of Staff directly asks him if he helped her son get into Stanford in hopes that she would help him get appointed to a high level position. She clearly has figured it out and she puts him on the spot.

Most people would panic, but not Frank.

He knows how to leverage the moment to actually make himself seem even more trustworthy. He uses the opportunity to make a strategic confession. He confirms all of her suspicions. And because she feels like she finally has the whole story (which she really doesn’t), she feels comfortable enough to move forward with their plan.

Making concessions or sharing your flaws can actually be highly influential. I outline this specific technique in more detail in this article.

Use Their Words, Not Yours

Once again Frank takes a blow when he finds out that the President wants to nominate someone else, Raymond Tusk, instead of Frank.

And once again, Frank is faced with the need to suspend his ego so that he can serve is bigger mission.

When the President asks Frank what he thinks about the idea, Frank responds,

FRANK:
I think that Raymond Tusk is an exciting, bold idea.

Clearly, Frank doesn’t share what he actually thinks. He did something even smarter.

Frank chose those words – “exciting” and “bold” – specifically because he was told prior to the meeting that that’s how the President felt about the decision. Frank used the President’s words – instead of his own – which made the President feel good and validated.

Be aware of the specific words your “mark” uses to describe a person, situation, thing, or their feelings. When the opportunity presents itself, use those keywords in conversation and you’ll get the same effect that Frank did. They will feel heard. They will feel validated. They will feel like you “get” them.

Door in the Face Technique

Sometimes the most influential thing you can do is NOT get what you want.

This is known as the “door in the face” technique. This is when you purposefully ask for something that you know the other person is likely to say no to. The theory is that if they have said no to you for one thing, they are more likely to comply to the next…or the next. When done well, you trigger the “mark’s” desire to be polite and helpful and they are more likely to work with you because they did, after all, already shut you down on one thing.

Or, in Frank’s words:

FRANK:
The only thing more satisfying than convincing someone to do what I want is failing to persuade them on purpose. It’s like a do not enter sign. It just begs you to walk in the door.

A Partner in Persuasion

Here’s the it’s-so-obvious-that-you-probably-missed-it influential lesson of House of Cards. Frank isn’t working alone. He has Claire with him. They create their plan together. They adjust to the unexpected together. They role play through critical conversations together.

This is directly reflected with the world’s best influencers as well. Field agents have their handlers to plan with. Some of the biggest cons are done with a team. Trial attorneys role play with fellow attorneys within the firm. Hostage negotiators will have a team of other law enforcement officers feeding them information.

Find your partner in persuasion.

I’d be honored to be your virtual partner in persuasion. Sign up for my newsletter and never miss another influential technique that can help you achieve your personal and professional goals.

Become Your Most Persuasive Self...

Subscribe to get the inside scoop on building your personal influence.

Success! Now check your email to confirm your subscription.

Why Admitting Your Flaws is Influential

4 Thoughts to Never Be Thrown Off by Objections Again